What a trip! An adventure in the sense of pushing the body and legs to the edge, looking over and jumping in for some more. I learned quite a bit from this trip to make the upcoming ride doing the Twenty Peaks a little bit more doable and maybe even more enjoyable. The first day I was on my knees after the penultimate climb of the day, the sun was already low and the light had been milky all day. Luckily I had Tony with me and we pushed up the last climb of the day and managed to get in four peaks, but I'm getting ahead of myself. What happened to the other climbs. 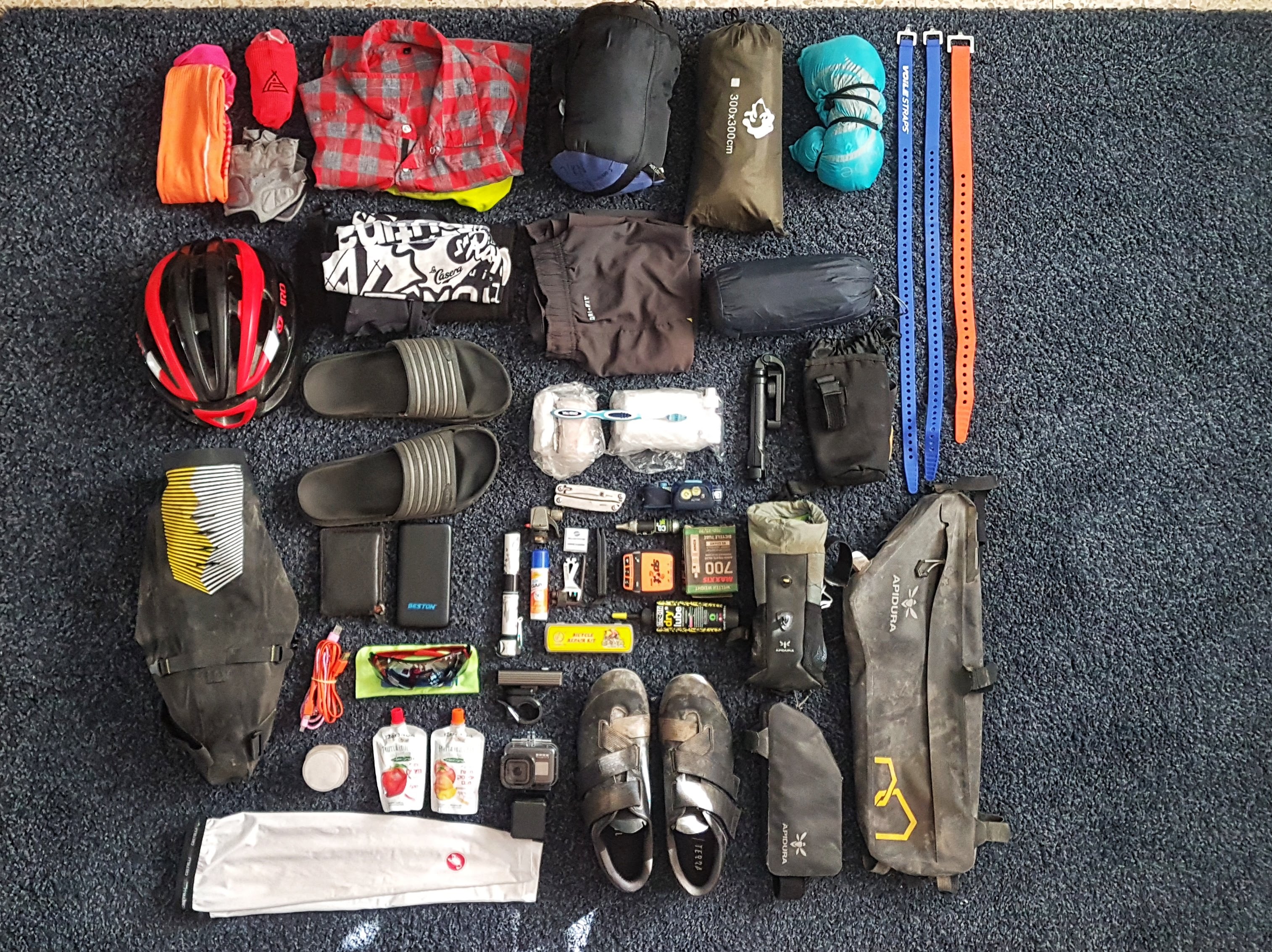 We started off on a long climb that in truth was three climbs that were stitched together going up and down. The route was really good in terms of terrain from what we would get to later in the day. Some sharp climbs on the first pitch just as we left the road but then we just gradually made our way up in the morning humidity that had blanketed the coast. Sweating from the get-go I thought I was pushing myself way too hard for the start but Tony said that he also felt the humidity so that at least put my mind to rest somewhat. As with most trips, the energy and excitement were at its peak as we chatted away, still able to talk and the brain was still managing to put together sentences. The end of the first climb to Har Shokef from Ein Carmel takes you next to Daleyet al Karmel which these little walls of 20%+ that just saw us pushing along and getting comments from the Druse families who were out harvesting olives, all I could do was laugh along and keep pushing. 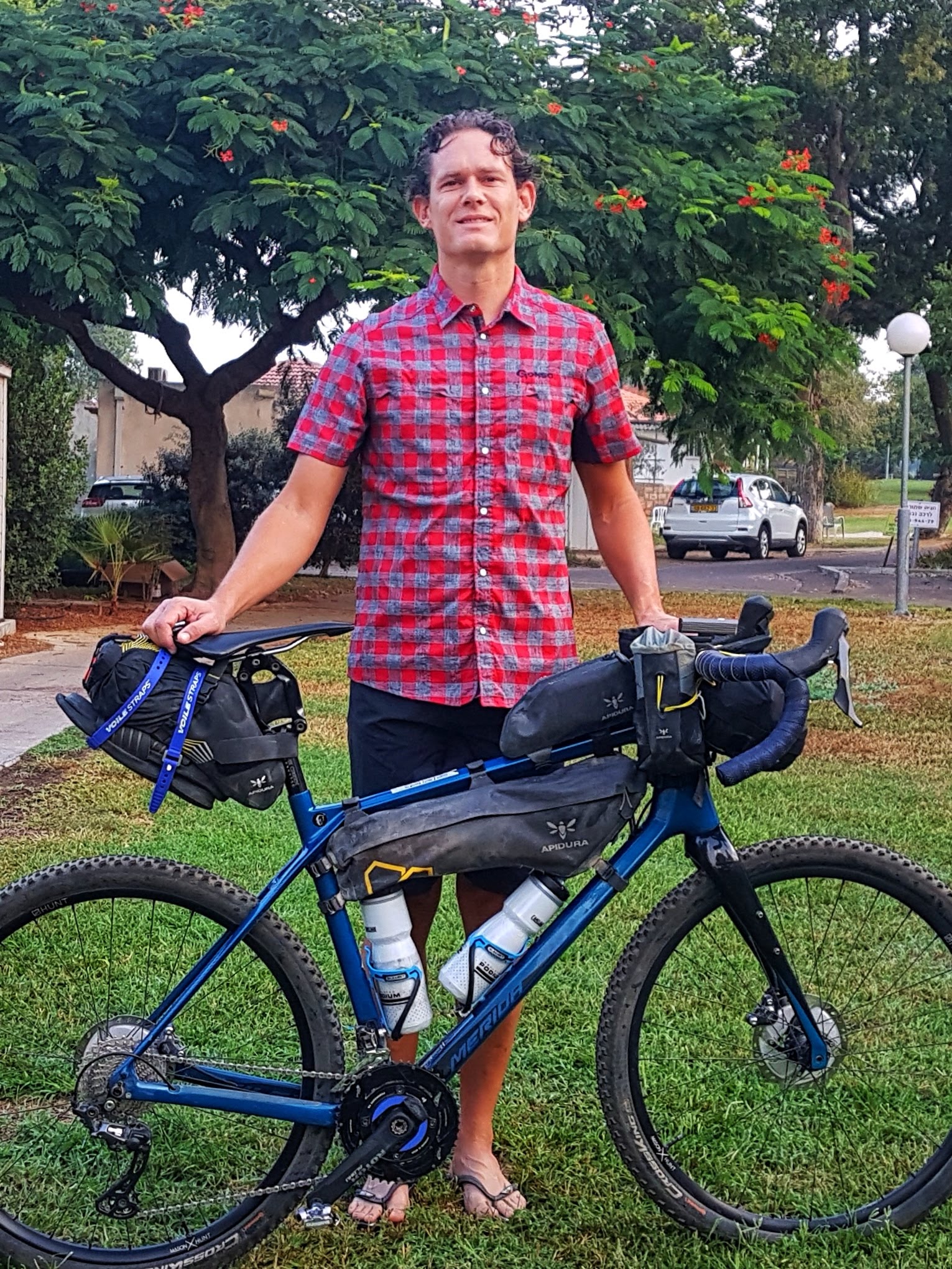 The first incident happened on the way down. The path got really rocky and would be an indication of what was to come from this side of the climb to Shokef. I do my bikepacking on a gravel bike with 650b wide tires so that I have an almost XC type of setup but just way more comfortable. Descents like the one we went down were not meant for my setup as I found myself getting stuck in a dip and doing a slow fall onto my side. Somehow I managed to not do any damage to my left side but got a serious knock on my right hand exactly on the padding that rests on the handlebar. We were twenty-odd kilometers in at this stage so this did not bode well for me. The next climb from Ein Hod really was a cool little climb that just wound its way up to the top, nothing too serious but the legs were starting to feel the effort. 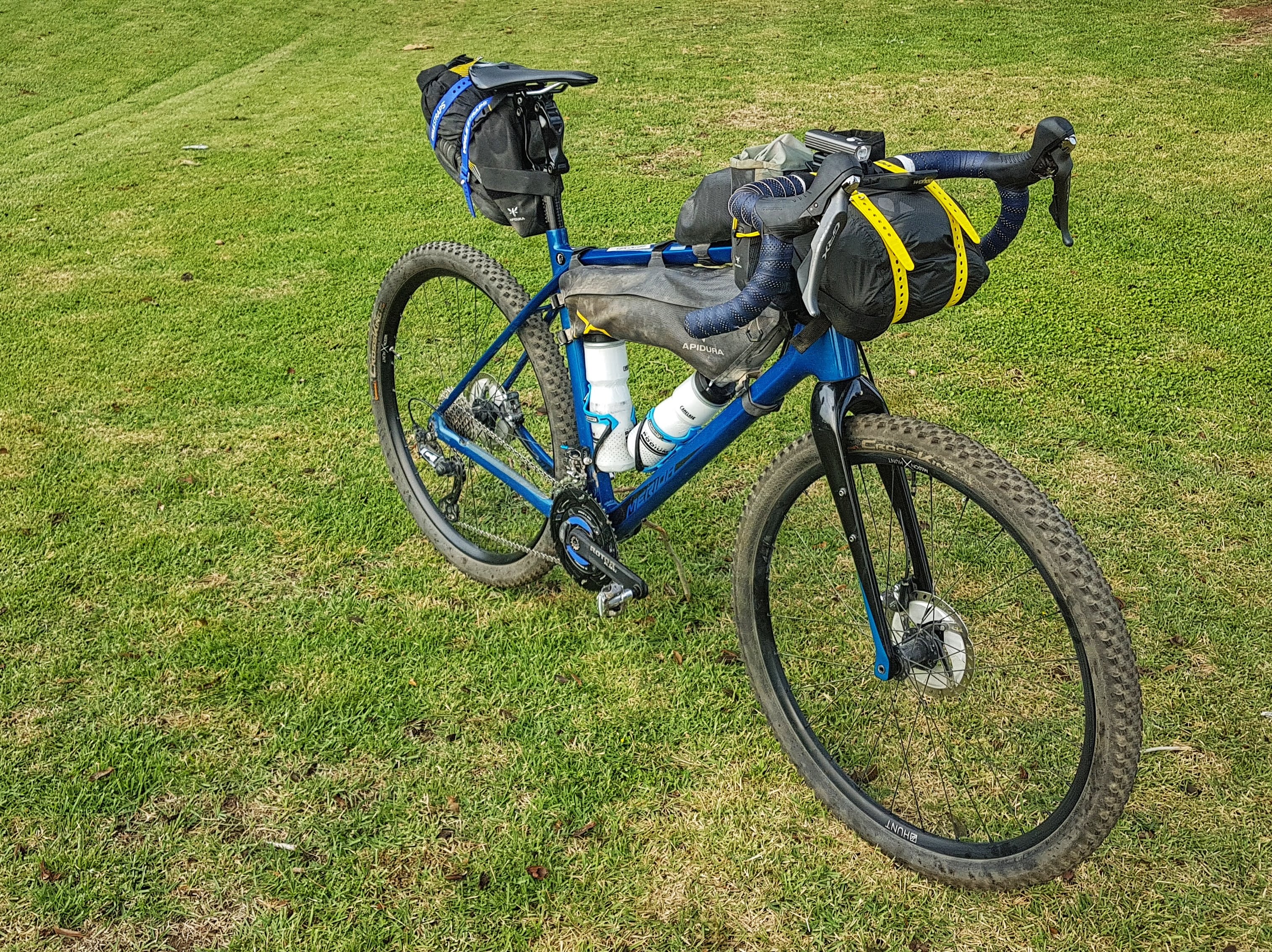 We descended and had some lunch in Carmel Park. Plenty of water for refreshing ourselves and some tables so a really good place to take a breath before pushing on. I was still feeling fine going through Beit Oren which has a beautiful climb overlooking the valley of Nahal Oren and some really mind-blowing geology. After this things got tricky for me and again it was partly the bike setup but mainly my body that was feeling the long day in the saddle. The trail looped around some really beautiful caves and rock features on a narrow path when ridden in the opposite direction is really cool. Going up though meant getting off and pushing over the rocks, this I basically had to do all the way up as my body was knackered and I just was getting beaten up by each rock section I tried to ride through with a bit more power. The climb was 20km long which I had in my head as much shorter and took over 2 hours. I had hit a dark spot by now and dropped down the Beit Oren climb on the road after navigating down from the top of the peak for the last time of the day. 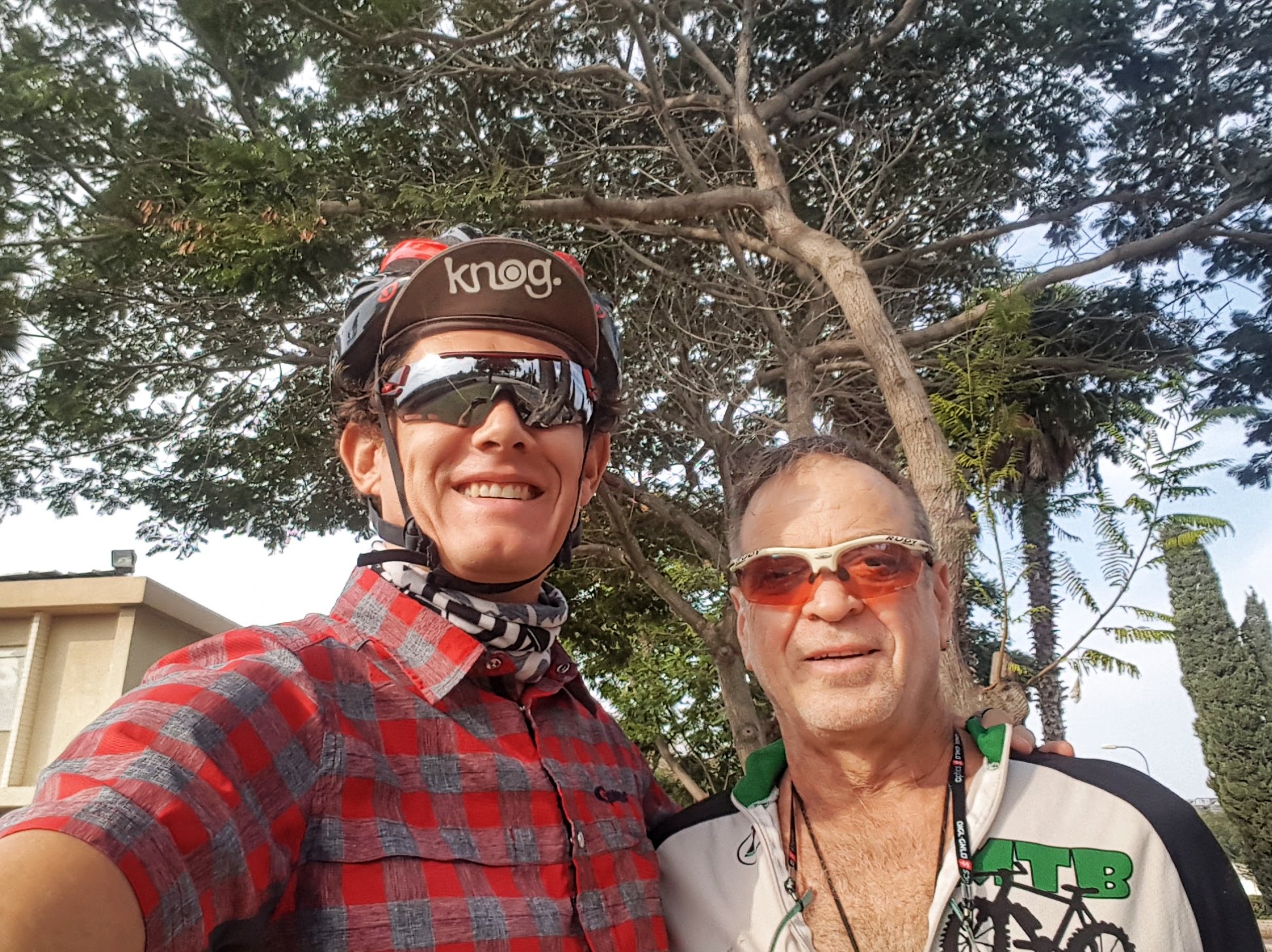 Tony was waiting and every time I tried to talk I was stringing together maybe 3 incomprehensible words. I needed to get something into me quickly and coke was just the thing to lift the spirits. I stay away from this toxic drain cleaner but there is no sweeter feeling of feeling your senses return to normal as all the sugar starts pumping into you. After a rest, we decided to climb Beit Oren and call it a day. There was supposed to be another climb but that would have to wait for another time. Having just taken a beating from the train where the next climb was going to also weave its way through I was once bit, twice shy. Beit Oren is a road climb, pretty famous in Israel, and has some really wonderful views. I also knew the climb so just had to find a rhythm and pedal away as the night time swallowed us up. 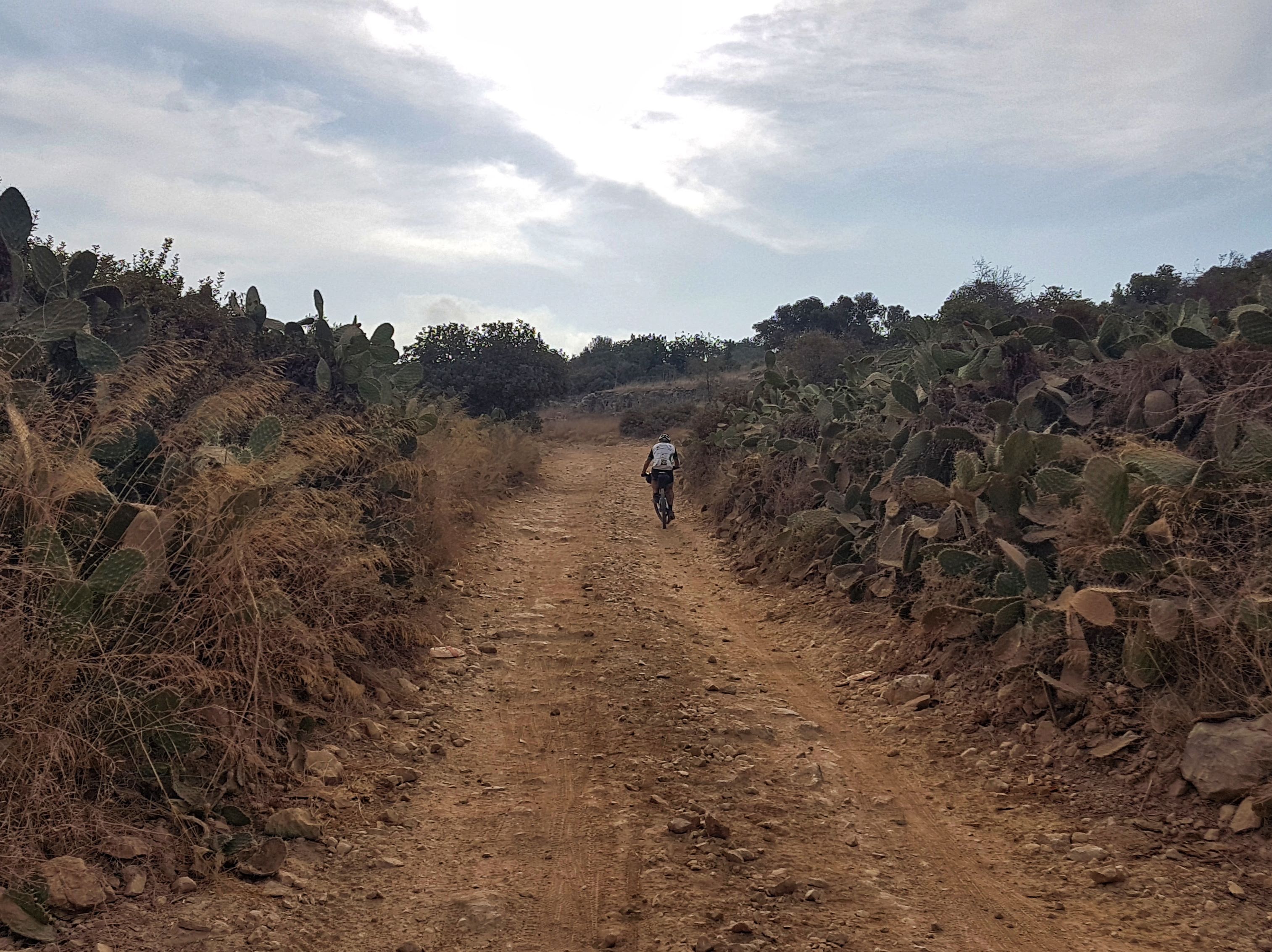 A meal for kings we had of proper food which is far from the ordinary I have on trips like these. I experimented with rice cakes wrapped in seaweed and they not only held up well but tasted great. We also had homemade black olives Tony had brought along as well as some biltong, an old South African favorite. We even had sprouted lentils so protein was put back into the system and the rice cakes made up for protein. Sleep took me quickly and this was one of the best nights of sleep I've had on a trip mainly due to me being too tired to actually worry about anything around me. I did though do some really good stretching before bed in the hope of recovering a little bit for the next day which it did do. The other treat, probably physiological, was some compression socks that I slept with to aid recovery and keep me warm. 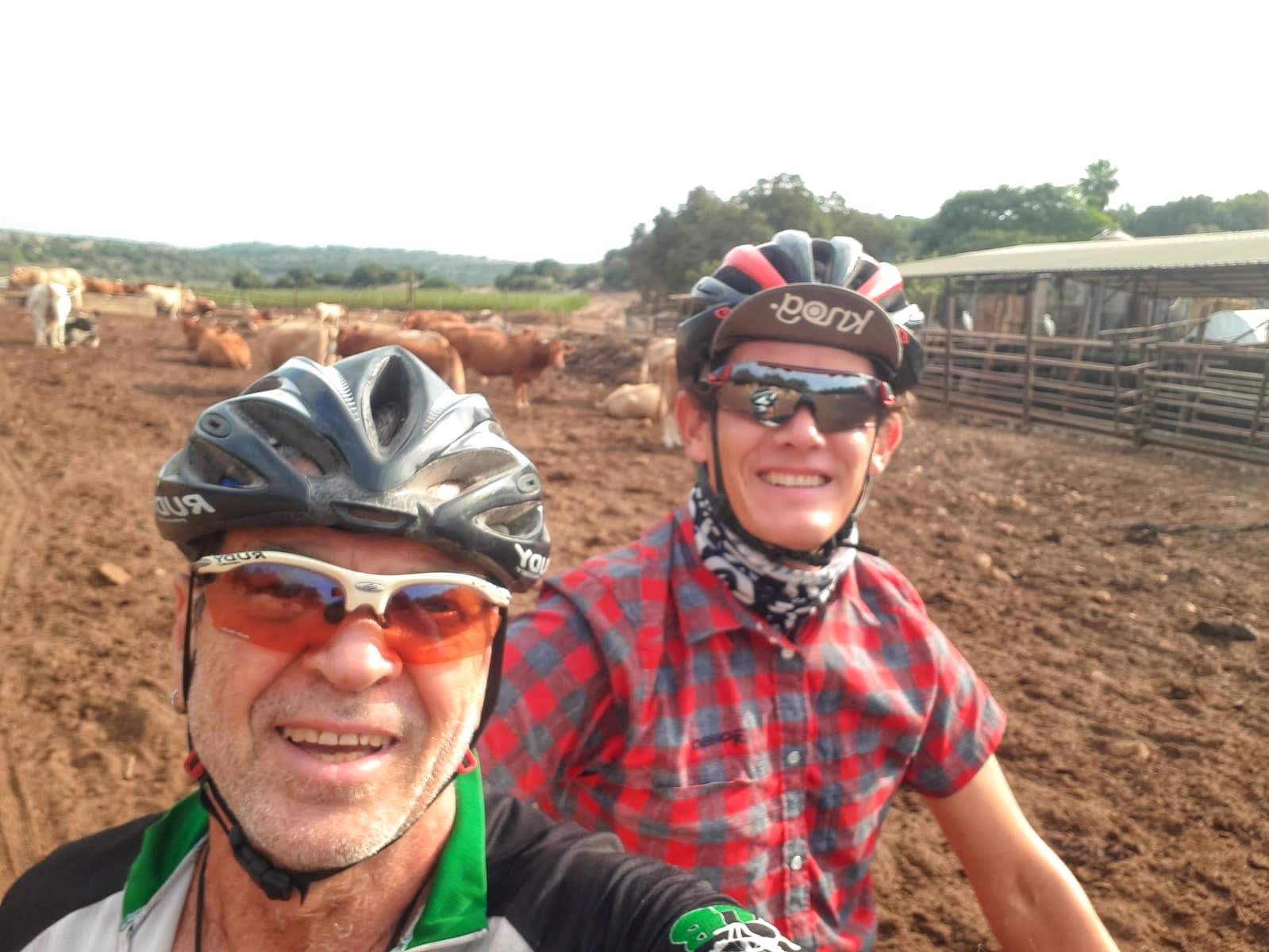 Day two started with an easy spin down the Beit Oren hill where we had spent the night. The riders were out in force climbing in the opposite direction and I must say I was happy to be going in against the stream. The fresh morning air and the heat still hadn't arrived as our legs slowly started turning and moving to get them warm for the long climbs to come. The day basically had two long climbs, one taking us across the Carmel and the other north along the edge on the dirt road back to Haifa. 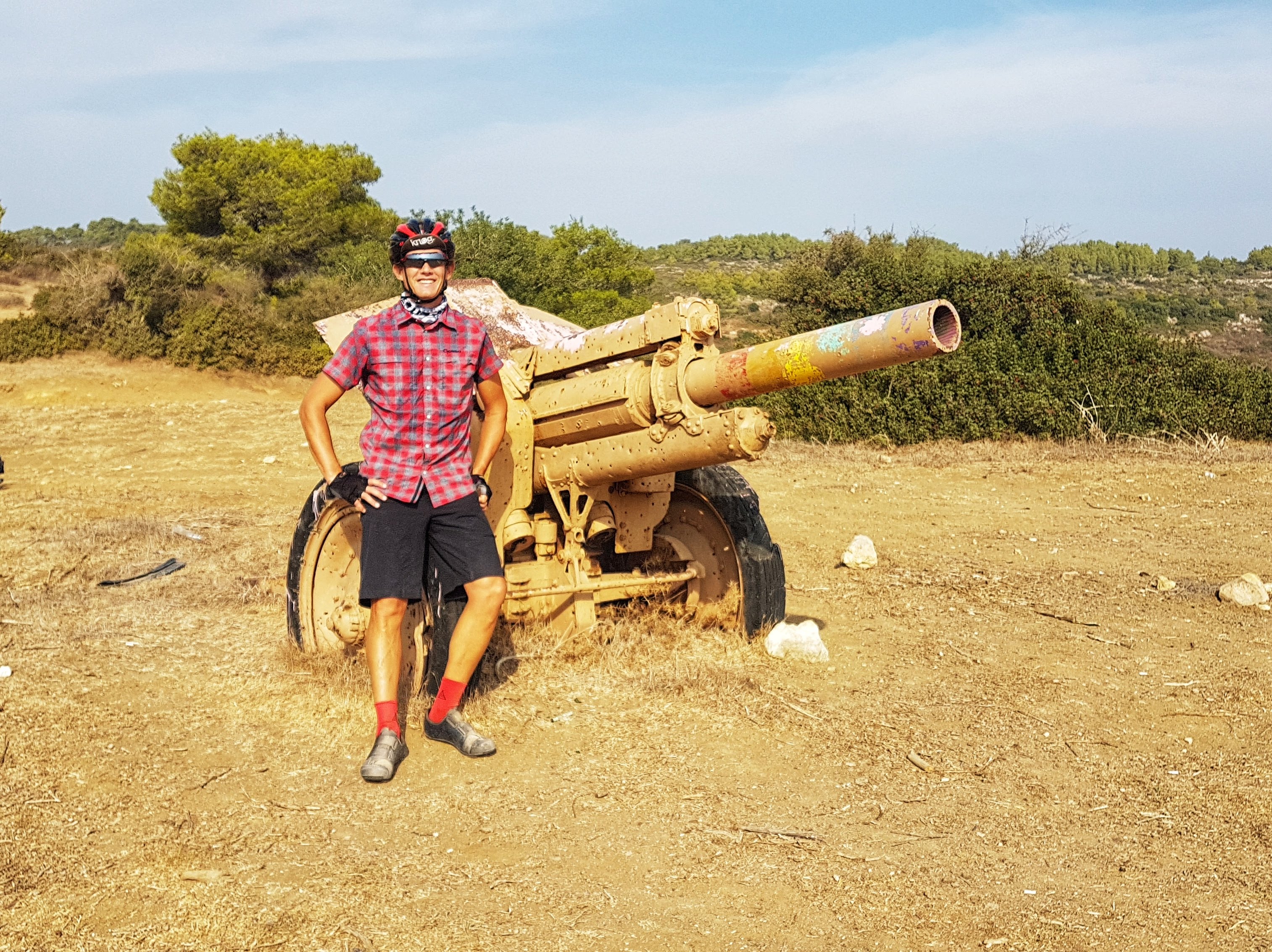 The first climb was just long with some rocky bits and pieces. I was not fighting the bike today I decided early on and as soon as I saw any sort of power section I jumped off the bike and pushed. There was no point in trying to kill my legs early on especially as I knew there was a sting in the tail and also the following climb started steeply. The climb up to Muchraka was really interesting as we were in the heart of the mountains and remote as you could get. Things got more interesting on the final push to the monastery that sits at the top from which the climb derives its name. We spotted it from a way off and then as we looped in and out it got slowly but surely closer. the final bit was luckily tared but unluckily also around 20% gradient, you win some you lose some I guess. The top had some beautiful views but I was only interested in the sandwich I had bought and stuffed into my bag. Having gobbled it down within a few breaths I was able to relax and get some water into myself with a tap right there. It was great to be able to wash my face and just refresh ourselves. 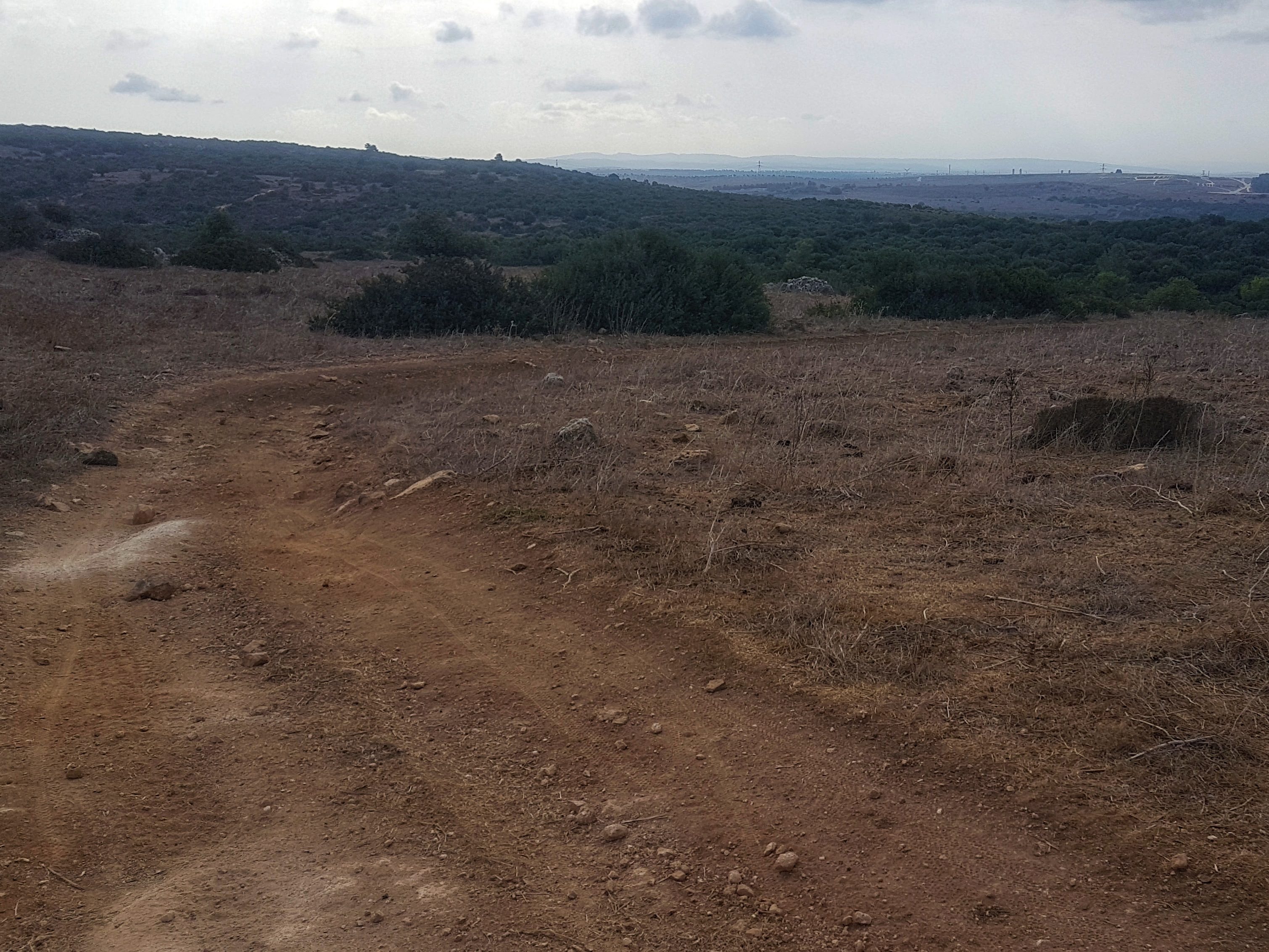 We descended on the road which Tony knew and was definitely a much better option than the original route. The second day we had already decided to swap around a bit and these changes made the day much more manageable. I would even say that doing the route with day 2 as the first day would be an even better option. Maybe placing the car at the top of Beit Oren and navigating around from there. Again stopping at the gas station to fill up, I chucked a coke and we were on our way to the toughest section of the day. My bike setup again not ideal from the rocky sections we were pushing over, this was the dark spot for me on the day as I was just being thrown around or pushing on the first 4km to get back up to the scenic road that goes around the Carmel. Luckily this didn't last long as I put my headphones in to get a few good vibes dancing around in my head to take my attention off the trail a bit. 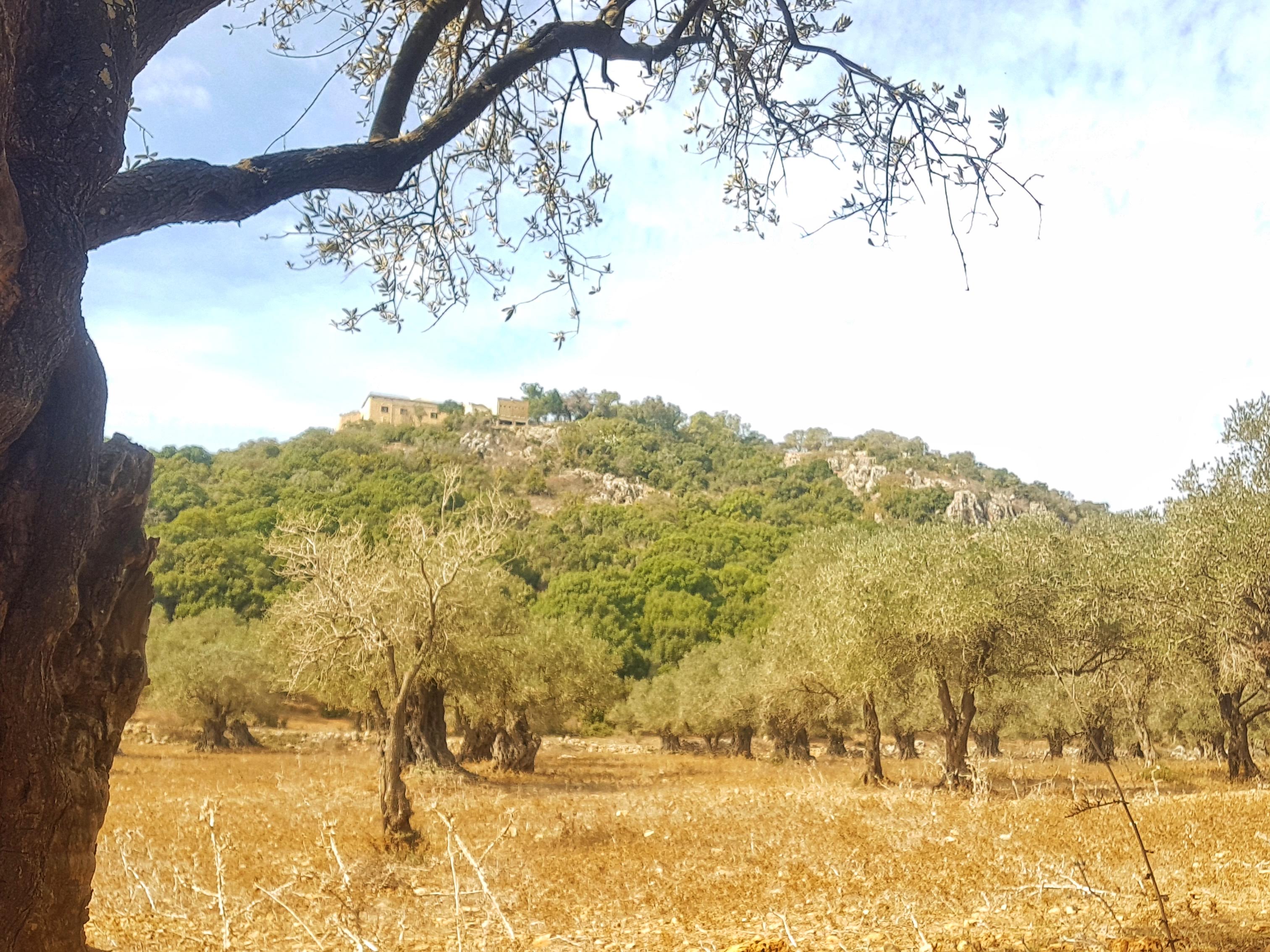 From there the loop around the scenic road was actually more downhill than up. My spirits lifted and I was singing and laughing once again as we made our way around. My legs weren't feeling too bad although my bottom was feeling two days of being bumped around on the saddle. I had in mind that the last steep climb was going to be rocky but we got ever closer and closer with no apparent rocks. The last bit of the climb to Isfiya was only about a kilometer and a half and a compact white road with a few rocky sections that I could easily navigate through. With the second climb done for the day and we had a choice to make. It was early and we had a road climb we could do or head downhill. 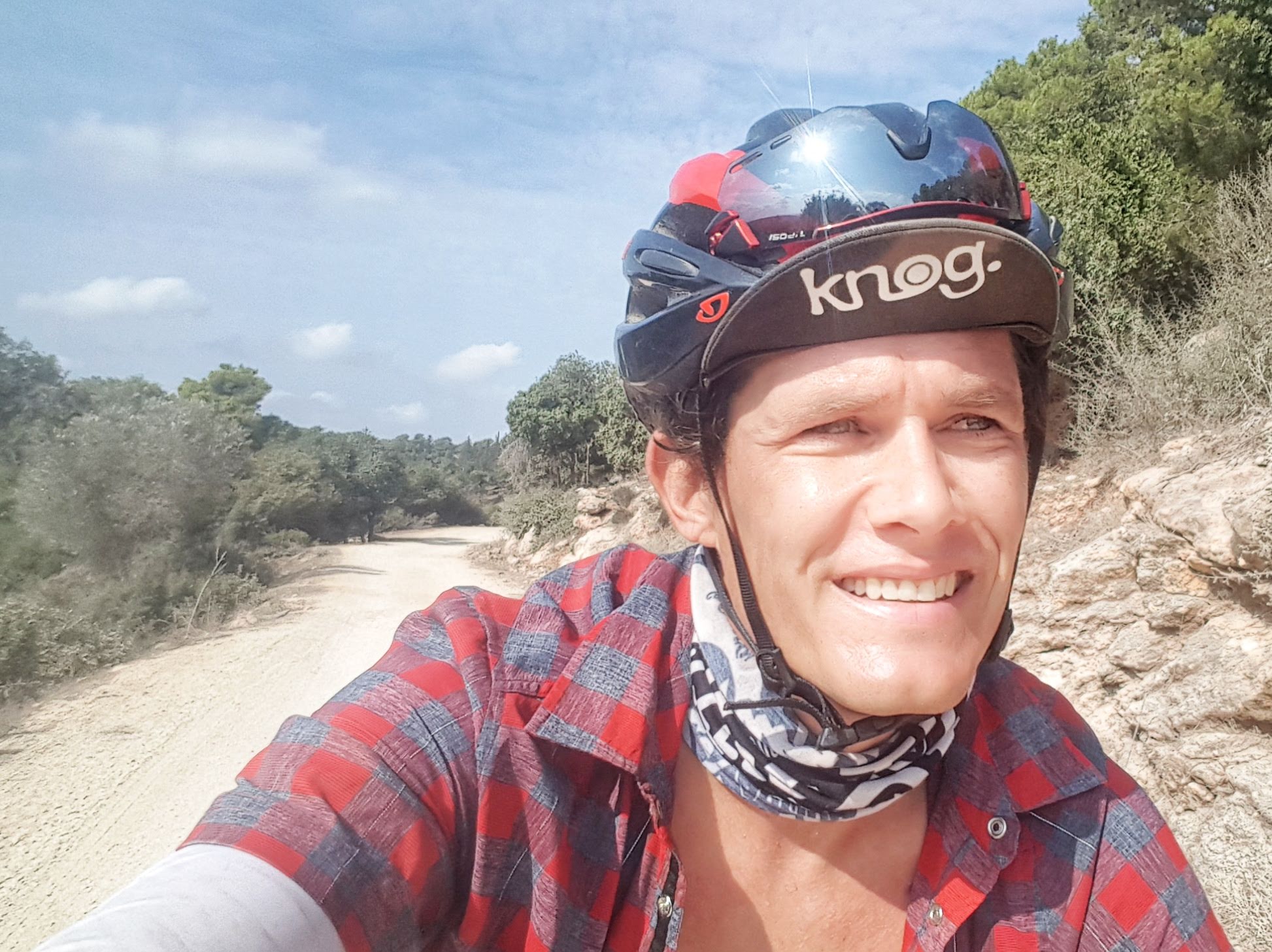 I am glad to say that neither of us hesitated in taking off another bite of the climbing pie and heading towards Nesher. This is a twisting switchback of a climb that is just a steady 8% gradient that you find a pace and apply power. My legs were pretty cooked by this time and I felt like we were chasing the sun a bit but the climb just helped that fade all into the background and we slowly ground our way up the climb. We ended in the dusky evening light back at our cars with big smiles and sore legs, happy that we had taken on a challenge and managed to make it through.

~Smiles at the end

I must say that I learned quite a lot about my capabilities and doing four climbs is a stretch with my current gearing and especially as these are off-road. The going is slower as you look for a decent line or grip. The bumpy rocky sections also make the climb so much more difficult. I'd say that doing 2200m of climbing in a day is manageable as we did on both days but that this needs to be stretched out over about 100km like the second day and not compressed into the 80km we tried to fit it into on the first day. I'm looking forward to the next trip and hopefully, it'll be next month in Gilboa.