This trip was my first solo adventure into bikepacking so I was a bit apprehensive but also excited to see how things go. I decided to really get my weight down on this ride firstly swapping to my mountain bike that has a front shock. It's carbon so definitely lost quite a bit of weight right there. I slimmed everything down and all said and told I was 7kg under the last Sea of Galilee trip. So things were looking good to start with but I had a few valuable lessons to learn. Starting out a bit later than I planned I was not playing catch up and really held myself back as much as possible. This route has plenty of climbing and that was before the little surprises came up. I had a descent breakfast and set off. The weather was great and even on the cold side a touch but perfect for climbing without overheating like a hamster in a microwave (no I have never put a hamster in a microwave). 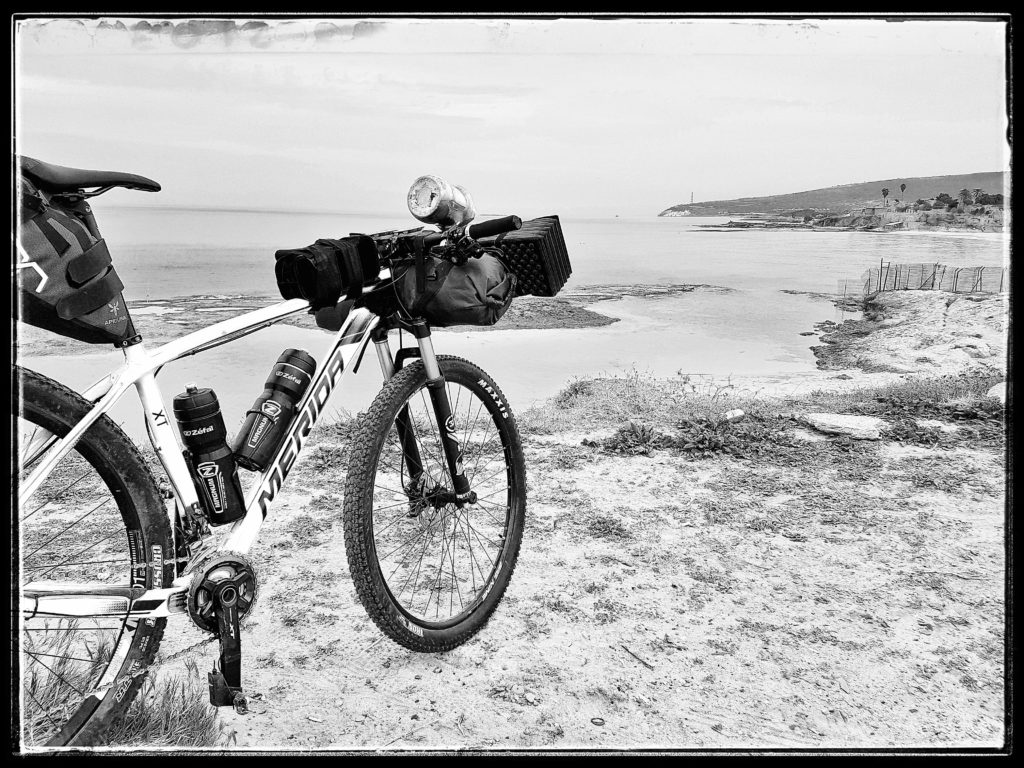 Climbing would be the order of the day with a huge side helping of hike-a-bike on the eye popping double digit percentages towards Bet Jan and Har Meron. I was making good ground and after hour two stopped at a picnic ground above the Montfort to fuel up a bit. This was lesson number 1, I need to eat much much more while doing these bigger rides. I didn't bonk but I was definitely hanging by a very tenuous thread near the end. 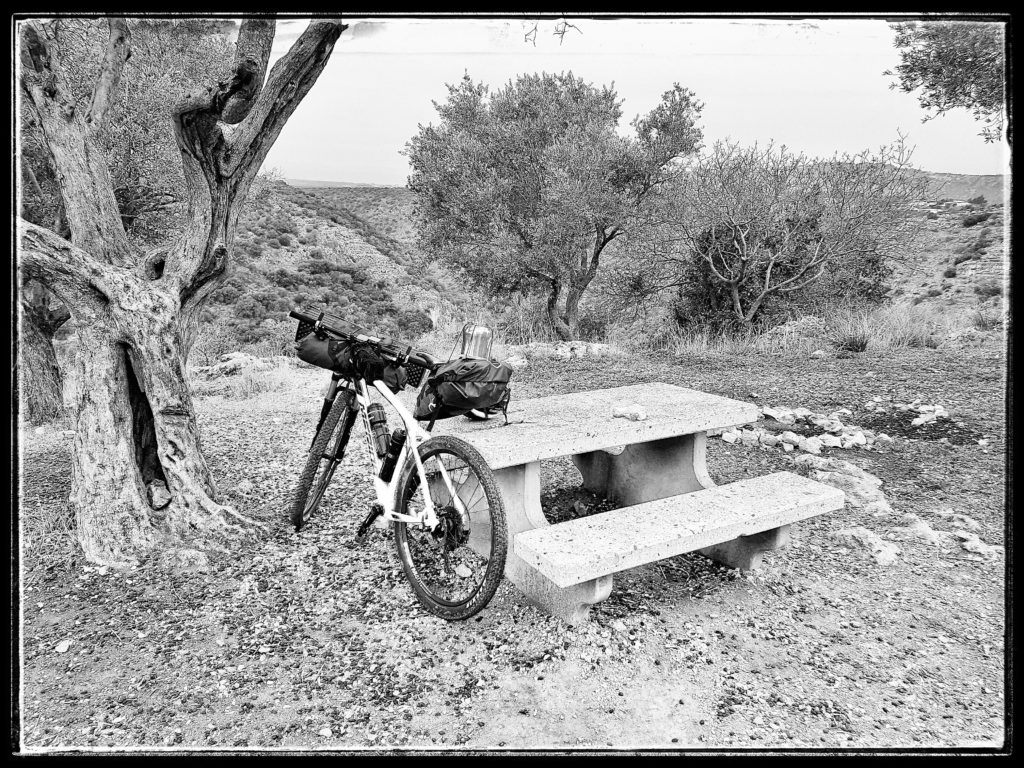 The views still amaze me even though this is my back garden where I spend most of my days riding. I love how fresh everything feels after a bit of rain and the landscape is turning green as winter finally wraps her cold fingers around the Galilee. Flowers are starting to pop up if you pay enough attention. Bits of blue and red spread around close to rocks. 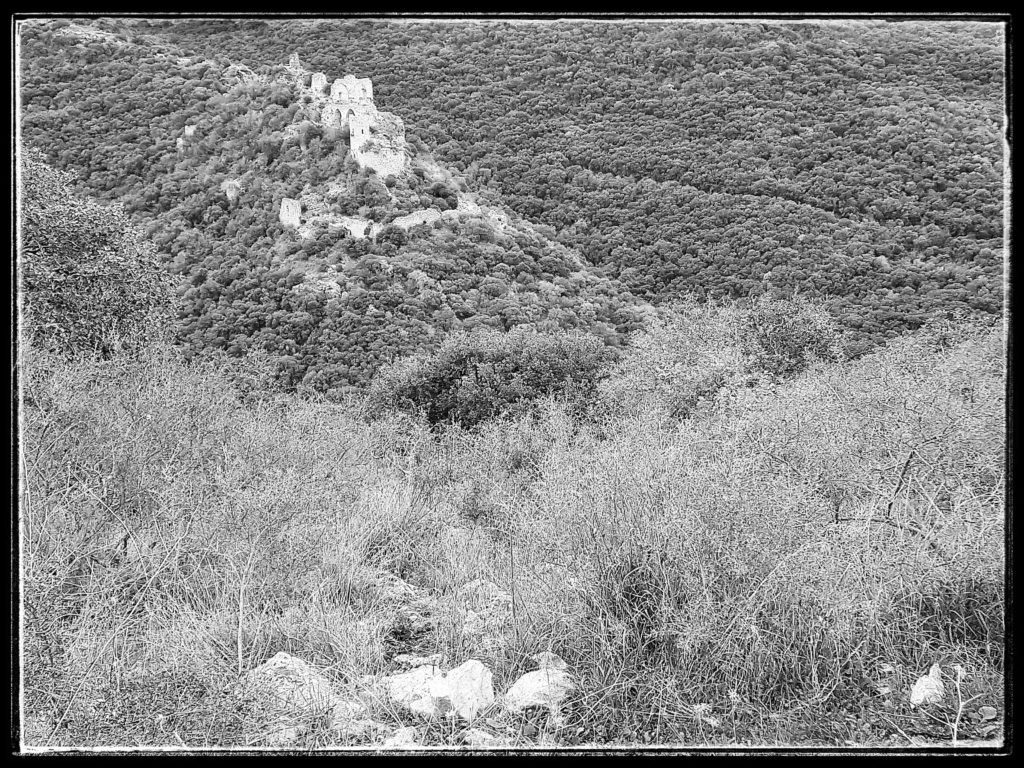 The trail that I am trying to work out should take in most of the highest hills from Naharia to Afula and aptly I have named the route Molehills. These aren't 200m climbs of the Alps but dimples we can call mountains here in the Holyland. These are not always friendly though as I found out pushing my bike along the rocky climbs looking at the percentage climb above 15%, even pushing was not fun never mind trying to turn lactic burning legs over at 40 rpm. 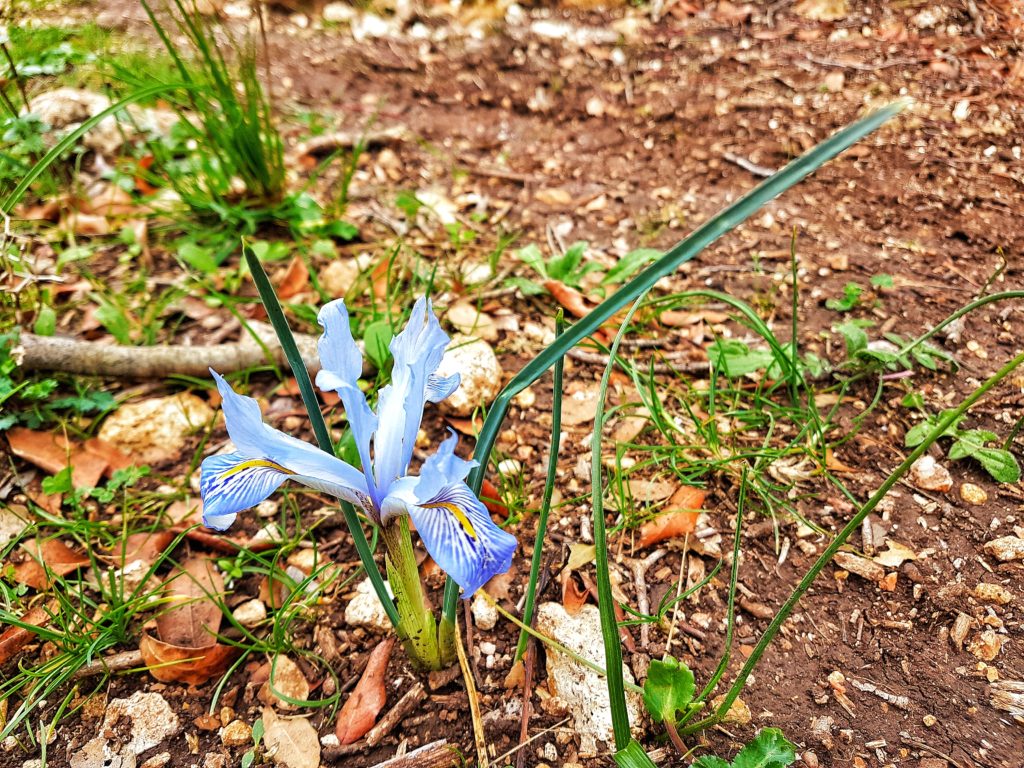 The second lesson was soon on hand as I wandered around a looking for a turn that was on the map but somehow had been swallowed by bushes and overgrowth. I zigzagged back and forth for half an hour before realizing I would have to climb to Bet Jan. This was not my first plan and having ridden through there I knew I was in for not only double digit climbs but in sections pitches above 20%!!!! Well I need to get around the hill so there wasn't much to do. 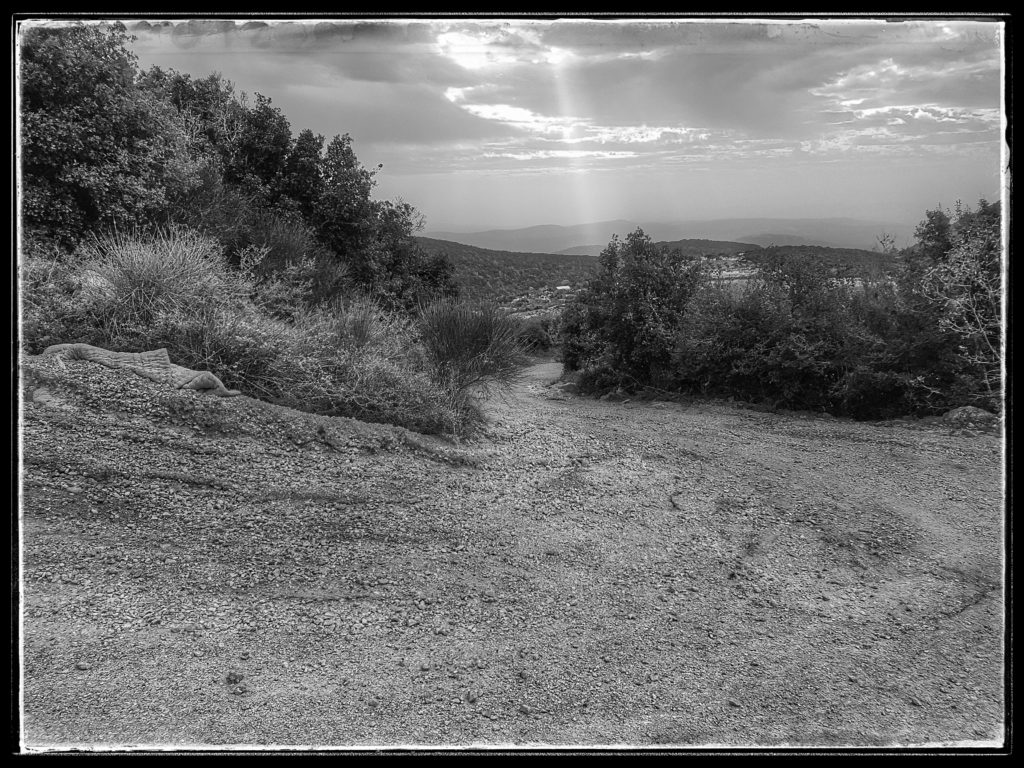 The trail then went up some sort of double track but again it was just silly steep and I was on and off the bike through the switchbacks and rocky ground. I eventually made it to the top of what would be the highest section of the day. An hour late for the lunch I had planned. I looked down to what would be my challenge for the rest of the day, a slowly deflating tire. In my oxygen depleted brain I simply tried to pump it up with the gas pump I had brought along thinking the tubeless system would kick in and seal any puncture. Alas the tire when I finally realized was not sealing had no more sealant left. It had run dry. 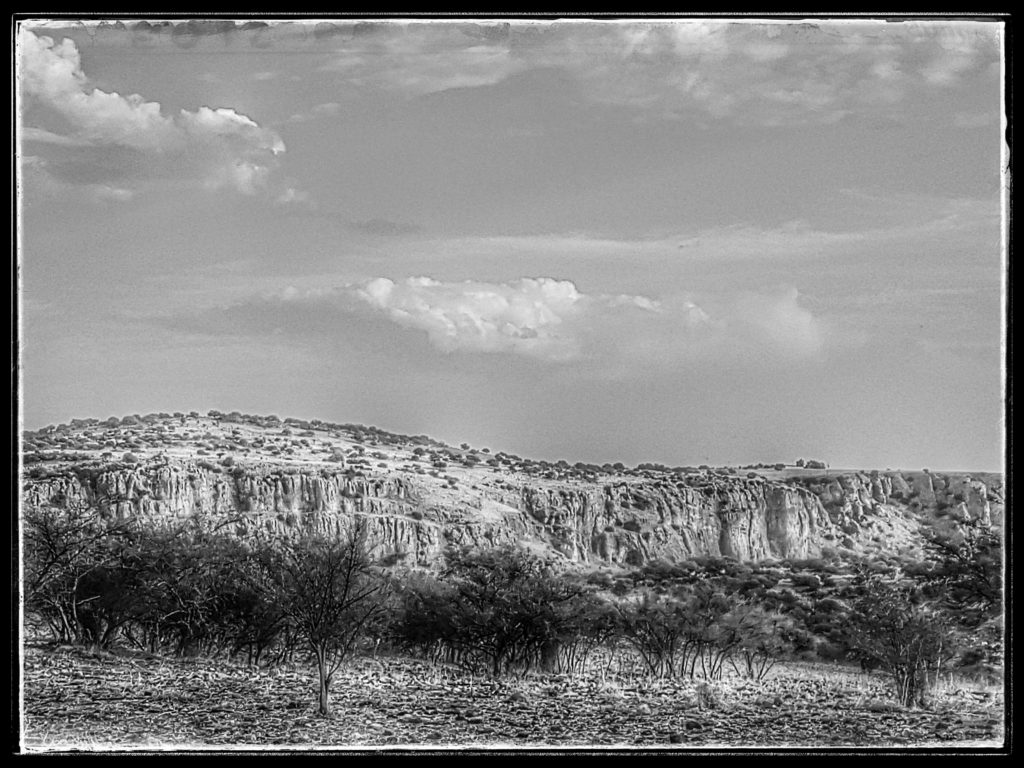 Not to worry I thought, I had come prepared with not one but two inner tubes. A bit I had bought the ones without sealant. It seemed I had pissed off some thorn god or puncture queen as I went through those on the way down from Meron. Not my finest hour on the bike and had left any puncture repair kit at home. I mean when would I ever have to go though 3 punctures on a ride!! So next time I will have that in my kit as well as some super glue. I limped toward the Sea of Galilee realizing I was not going to finish my planned ride. A bit of a bummer but still managed 95km's so not to bad. I reckon I could have hit a century were it not for the detour and of course technical difficulties. 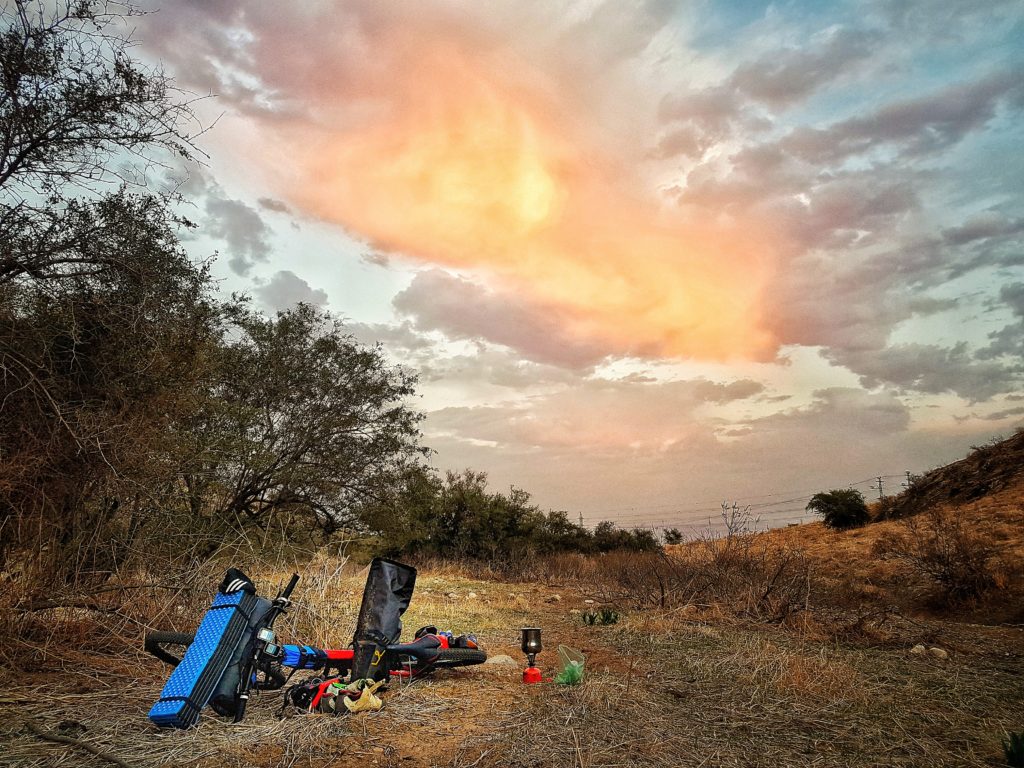 So I have unfinished business finding a way across to Meron and of course to get all the way to Afula which might hold a few more surprises for me. It will be interesting.